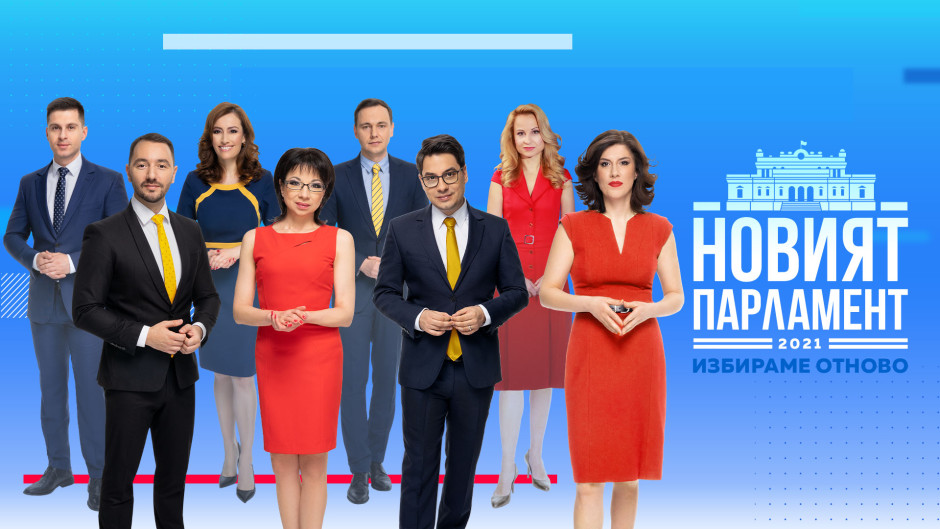 Strong journalism, outdoor virtual reality,  curious guests and live broadcasts from dozens of hotspots in the country and abroad will be offered by bTV Media Group to viewers, listeners and online users in the election day of July 11. The hosts of the television with the highest trust in our country* will talk to reputable guests, top experts and analysts both in the 360-degree studio "The New Parliament: We choose again" and in front of the parliament building.

The election race on bTV will start at 7:00 with the extended edition of "This Saturday and Sunday", which will be broadcast from two studios. With live feeds from three continents and from all over the country, Jeni Marcheva, Diana Lyubenova and Alexandra Krasteva will follow in real time the beginning of the election day, and Maria Tsancarova will join from the set before the National Assembly. Among the guests of bTV from 7:00 to 12:00 will be bright public figures, experts, intellectuals, stars of sports and show business, etc.

The show will continue until the extended noon edition of the bTV News, which within an hour will follow everything important from the beginning of election Sunday in different parts of the country, in Europe and in the United States.

At 14:00 and 15:00, the viewers of bTV will have the opportunity to find out about the events so far in two special news programs, and at 15:30 the special election studio "The New Parliament: We choose again" will start. More machines and more sections abroad - will the new rules affect turnout? Who will cross the threshold of parliament this time? Will a majority be formed? These are just some of the questions whose answers will be sought by the hosts of the multi-hour open-air TV marathon in the person of Anton Hekimyan, Svetoslav Ivanov, Tsvetanka Rizova, Jeni Marcheva, Maria Tsantsarova, Lilyana Boyanova, Ivan Georgiev and Denislav Borisov.

Traditionally, a team of more than 250 professionals, including more than 30 bTV reporters, will follow the vote from 17 points across the country, as well as in nearly 10 important locations abroad, with a focus on machine voting and fairness. BTV correspondents in different parts of the world promise meetings with Bulgarians, whose vote should be facilitated by increasing the number of polling stations, and investigative reporters will once again follow in the footsteps of the new vote buying schemes and signals of fraud and irregularities.

For more than 8 hours, top analysts, prominent political scientists, sociologists, journalists and opinion leaders will be interlocutors of the presenters Anton Hekimyan, Tsvetanka Rizova and Svetoslav Ivanov in the 360-degree election studio, as well as in the special outdoor studios in front of the National Assembly building. Maria Tsantsarova promises to meet the viewers with the most interesting interlocutors in the open air, and under the inscription "Unity makes strength", the election results will "come to life" in a real visual spectacle, with the help of the latest generation of augmented reality and host Denislav Borisov. Exactly at 20:00, and in the virtual studio of bTV Lilyana Boyanova will present through innovative 3D visualizations the first results of the exit gender of "Alpha Research" and "Market Links" in key regions of the country. The host of bTV News Ivan Georgiev will follow the comments on social networks, and after the announcement of the first results - and the possible distribution of seats with the parliamentary calculator in the studio.

The viewers of bTV will witness the first comments of the main political formations, and the newsroom of bTV will traditionally continue to cover the events after the end of the election day - with the handing over of the papers to the district election commissions.

In addition to bTV and bTV Radio, viewers, listeners and users will follow the events on election Sunday on the website and mobile application of the bTV News. Everyone in front of the screens can comment and ask questions to the politicians on the Facebook page of the newsroom, and the platform "I, Reporter" will collect signals about irregularities and interesting facts.