For a third week, the hype around the new late night show of bTV Media Group doesn't cease. The fresh host, the guests, and the colorful humor are attracting new audience segments to the slot 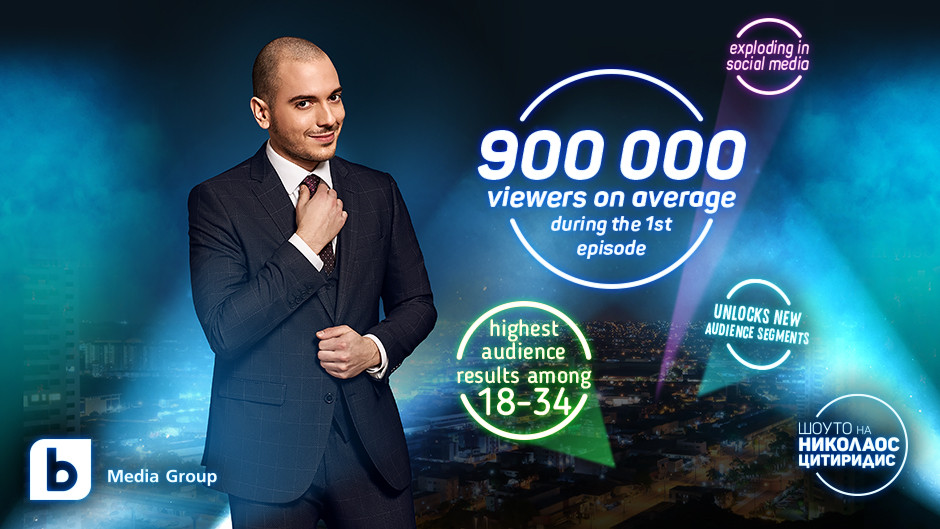 The pilot episode of the show attracted nearly 41% of everyone watching TV on Monday night.

Based on the overall 4+ audience, the new bTV show was watched by 2.9 times more viewers than Nova TV. 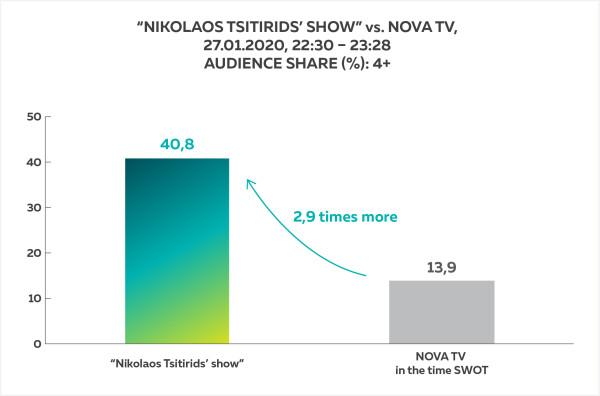 The show attracted its largest audience among young viewers between the ages of 18 and 34 - 44.3% of them watched the debut of the new face of the television - Nikolaos Tsitridis. The show has 2.4 times more viewers than Nova TV. 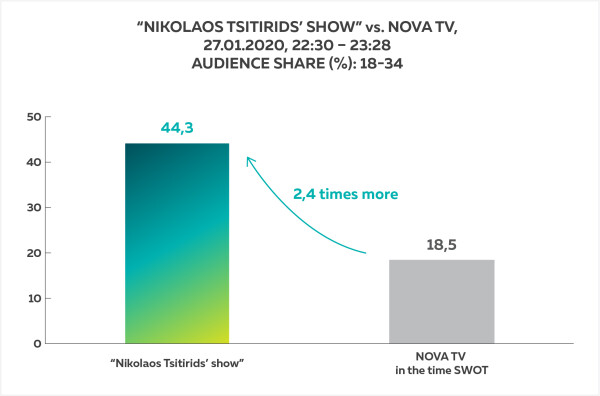 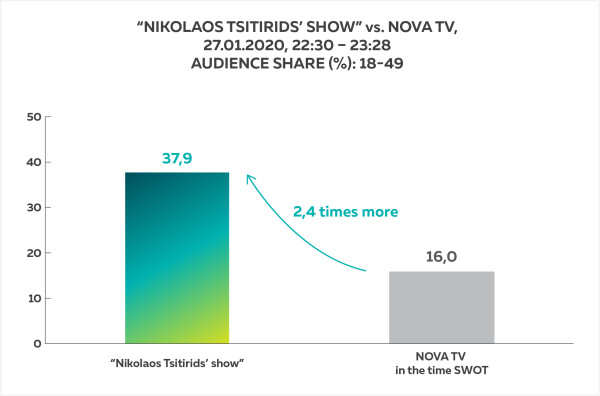 Along with unsurprising impatience and positive attitude from the media, the new late night show, in addition to great audience interest, also received strong approval in the media and social networks. The most read and influential print and online media praised the new discovery of bTV - Nikolaos Tsitridis.
"The comedian and journalist with Greek roots has become a kind of media sensation" (offnews.bg), "A good start for Tsitiridis" and "The humor, the way he interacts with viewers in front of the screen and in the studio, the set design, subject matter - everything is aimed at young people" (Slaveykov Square), "What the bTV producers did and for which I sincerely thank them is that they chose someone who grew up in front of a monitor, born just a year before me, and with a name that no one can say - Nikolaos Tsitiridis" (24 Hours) are just some of the positive reviews for the show in the media.

In the lifestyle media, comparisons of the host with his predecessor in the late night time slot are also in favor of Nikolaos Tsitridis.
"Young Nikolaos has no need to pretend to be anyone else, say our colleagues in "Webcafe" in their analysis.

The show blew up social media instantly. Building strong communities, the premiering show is attracting fresh young audience of non-traditional TV viewers especially on Instagram. In its first week of broadcast bTV’s new late night show has reached over 400K users on social media who engaged with our premium quality content over 140K times. Nikolaos is well appreciated by all ages and loved by the young with 65% of the show’s Facebook fans so far falling in the 18-34 group.

The variety of comments on social networks impresses with the overwhelming number of positive reviews and encouraging comments about "The Nikolaos Tsitiridis Show", which are atypical when presenting a brand new show with a host unknown to the wide audience.

The enticing segments and dynamic structure of the new show will give space for memorable brand integrations - in a positive environment.
The Nikolaos Tsitiridis Show will now offer a wide range of placement options - in segments, skits, AR, or integration of a brand characters.

The Sales team is available to discuss the various options with you.