bTV is considered the most independent TV and first choice of viewers during important political events. These are the findings of a nationally-representative survey of Noema*, conducted in July 2020, according to which bTV also gives access to the most correct, reliable and objective information during key political events.

In the context of the economic crisis after the isolation and the numerous protests in the country, 30.8% of all aged 35-54 pointed out bTV as the TV, which they appreciate as the most independent and impartial from government or other political influences when covering political topics and events /26.1% for NOVA; 7.1 for BNT1/. 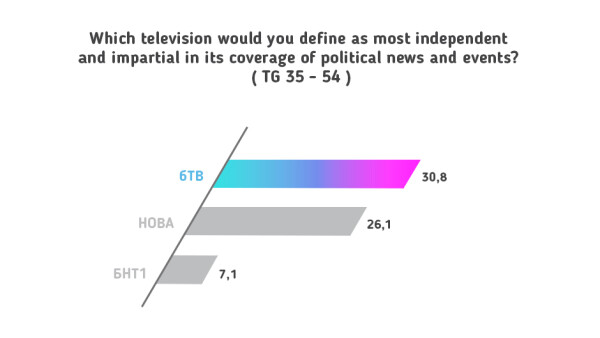 Nearly 40% of all respondents in the same age group would choose the bTV air first to be informed during key political events such as elections /33.4% for NOVA; 9.3% for BNT1/.

According to 37.6% of all adults, the TV gives the audience access to the ideas of the largest circle of representatives of the various political forces /30.7% for NOVA; 7% for BNT1/. 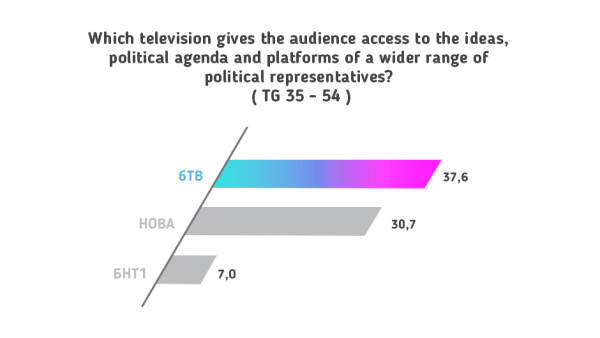 To a question whether they are following the topics in development and on which media, nearly 60% of the respondents point out bTV, and 34.7% of all adults place it on the first position.

At a time when bTV puts a focus on the news content and the coverage of the current events in the country, the survey reveals that over 36% of all respondents say the TV gives access to the most correct, reliable and objective information during important political events /Nearly 28% for NOVA; 7% for BNT1/. Over 37% of all respondents think that bTV presents the political information in the most accessible and understandable way /28.5% for NOVA; 9.5% for BNT1/. Among all adults, 36% would choose bTV to ask a viewer question to a politician.

The survey results confirm the leading position of bTV with regard to the new technologies, used to present the information – 36.6% of all adults /28% for NOVA; 6.2% for BNT1/.

The greatest number of users in the age group 35-54 trust btvnovinite.bg most among the TV website as a source of information for important socio-political topics – 17.7%. /12.3% for nova.bg/. Most users in the category also trust the social networks of bTV for up-to-date and impartially presented news - 21.2% /16.4% for NOVA/.

Just a few weeks ago bTV celebrated its 20th anniversary as the TV, which viewers feel closest to themselves and their values, and which they trust and feel on their side, according to a nationally-representative survey of Market Links, conducted in May 2020.