bTV is with Best Coverage on Election Day

In October, nearly 1 million viewers, or 41% of all in front of the TV screen at 7pm, chose to be informed of the most important news of the day by bTV's central newscast, according to GARB.

The TV shows “bTV Reporters”, "120 Minutes" and "Face to Face" were again without competitors in viewership for their genre throughout the whole month.

On election Sunday – October 27, most of the viewers chose bTV.

The people meter audience results were also confirmed by the conclusions of a “Market Links” survey, last week, that bTV was the best-rated television in three main indicators - best coverage, most interesting guests and best presenters.

The trend continued in early November, when bTV attracted the largest number of viewers on the day of the ballot. The November 3 election studio "The Locals 2019: You're Moving Again" was favored by 30.2% of the total TV audience. The central news cast of bTV, which summarized the most important events on the day of the vote, was watched by over 900 thousand viewers, or 34.8% of all in front of the TV screen. 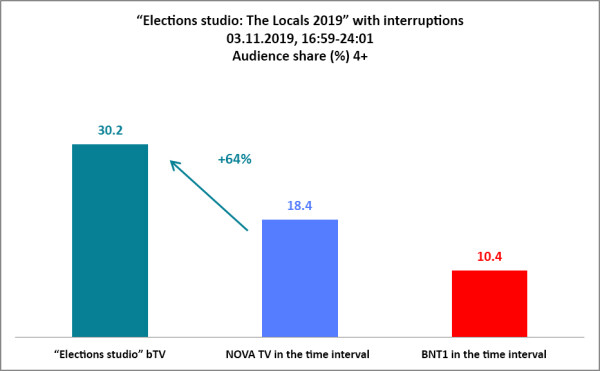 In October, bTV reaffirmed its leading position in both entertainment and reality shows and series, attracting the most viewers across all genres.”Bulgaria`s Got Talent” is October's most watched show and a definite favorite of the viewers in the entertainment genre, while “The Farm” is the most watched reality TV hit. bTV was preffered in the late time zone with “Paparazzi”, “The Comedians and friends” and “Help 112”, which have earned more viewers than other primetime titles.

Our team creates daily high quality content, strong investigations and expert-level analyses, supported by the most advanced technology to maintain therecognition as the most preferred source of information in Bulgaria.