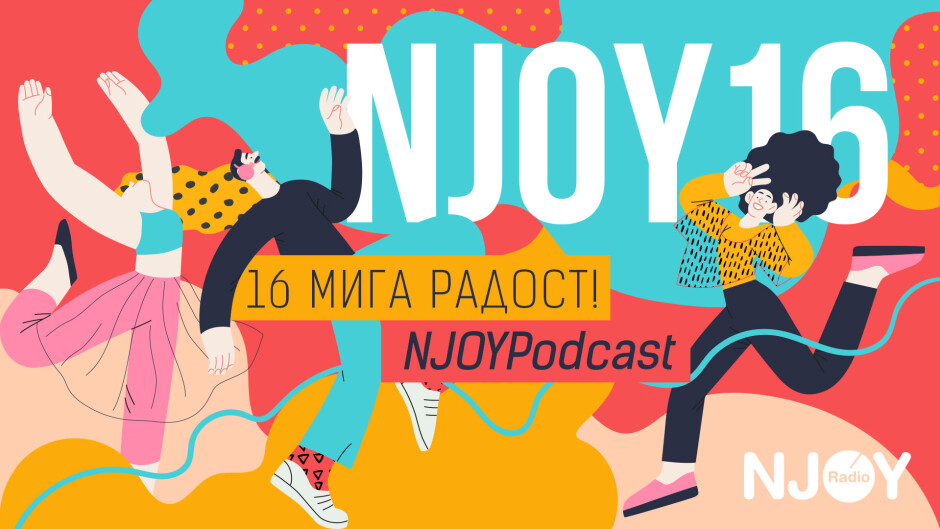 Radio N-JOY celebrates 16 years on air with the first of its kind NJOY Podcast. Starting from June 1st everyone can hear the first episode dedicated to the untold story of N-JOY in the special section of the radio site, as well as on Spotify and Anchor. The first to stand in front of the microphone is none other but the iconic Inspector N-JOY. What is it like to master the magic of radio for 16 years and can you shock someone with the line "Give me 3 kilograms of cucumbers"?

In the NJOY Podcast episodes, the floor will be given to the "UNusual suspects." For the first time you will hear the story of your favorite radio, told by those who do not stand in front of the microphone. Hosts, sound engineers, journalists, producers, people who have always been behind the scenes and have been working for 16 years so that listeners can enjoy hit music and hear the good side of life. In the first episode, the guest host was the always loud and radiant Gergana Boteva, and the secret of the good news is revealed by Simeon Cheshmedjiev. NJOY Podcast starts with a series of 6 episodes that will immerse you in these 16 years, past 16 moments of true joy.

In parallel with the podcast, Radio N-JOY had prepared a special holiday program on the air from June 1 to 10. In a series of interviews with important people, N-JOY presented the intersection between the 16-year history of radio and that of music, theater, cinema and audio business in Bulgaria during this period. The guests in the studio included musicians Ruth Koleva, Preya, Mihaela Fileva, Innerglow, Mihaela Marinova, director Viktor Bozhinov, voices Stanislav Dimitrov - Stanley, Kiril Boyadzhiev, Svetlana Smoleva, cultural manager Hristo Hristozov and others.

According to the latest data of the people-metric agency GARB, received at the end of May, for the month of April Radio N-JOY is the most listened radio station in the whole country, with the largest audience in the 15-69-years-old category.

Last but not least, what is a birthday without presents? On Children's Day, Radio N-JOY also launched a fun game on its Facebook page. Anyone who answers with a comment below the post of the day's question can be among the three lucky ones who will win luxury presents at the end of the game.