Spring Is The Time For “The Show”, bTV's New Entertainment Format

The kings of the comedy genre will entertain viewers with first-class humor, unique skits and inimitable characters 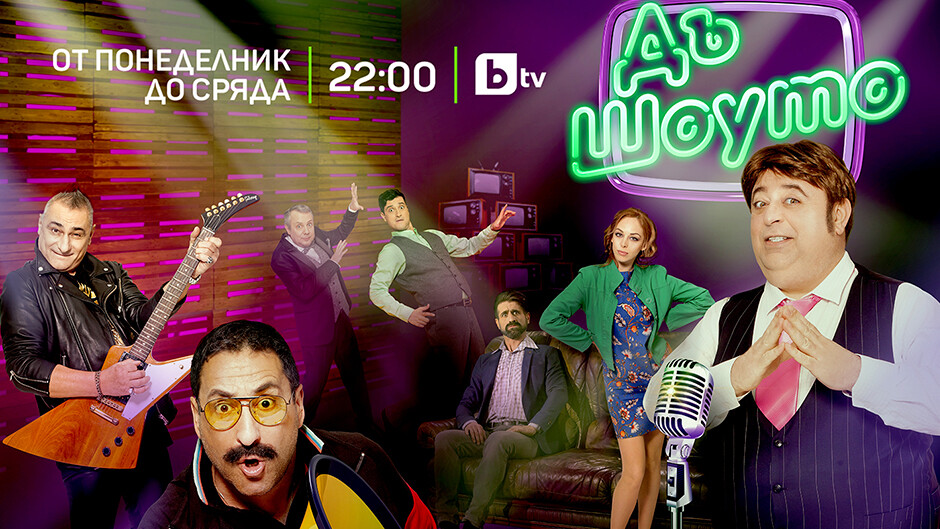 "The Show" - first-class humor, presented by the best and favorite comedians of generations of Bulgarians, awaits viewers in the new fun format, which will shake the air of bTV from May, 3rd. Lubo Neikov, Toncho Tokmakchiev, Hristo Garbov, Nencho Ilchev, Petyo Petkov - Shaybata and Rada Kairyakova will guarantee the good mood in front of the screens under the direction of Dimitar Mitovski.

"The Show" is a fun wink to all the familiar evening talk show formats, recreated through the eyes and through the authentic talent of the kings of the comedy genre in Bulgaria. The actors will play classic characters and comment on current affairs in a comedic "clash" with appropriate sense of humor. The relationship between the characters and the development of storylines between them will be in the form of comedy skits, and the "silent witness" of the funny impressions will be, of course, the television studio.

"With "The Show", bTV Media Group is taking a step into the field of the exciting genre that is parody, with the ambition to offer viewers innovative entertaining content. The well-known masters of humor gather in a new TV format and with their talent will upgrade our ideas for entertainment on weekday evenings," said Mr. Hristo Hadjitanev - Programming Director of bTV Media Group.

The combination of skits, authentic characters and acting improvisations, through which the best comedians in Bulgaria will tell what lies behind the success of a real television show, make "The Show" unique and different from all other entertainment shows in Bulgaria.