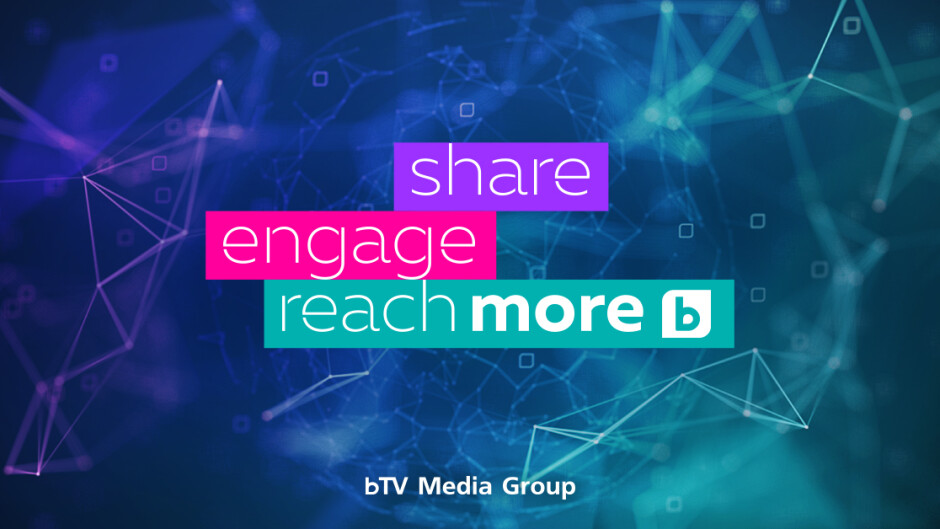 Television informs, entertains and amuses. It provides topics for conversation, for laughter, as well as for conflicts in which truth is born. With its spring season, bTV united the diverse roles of television, which made it the most watched national TV channel by Bulgarians during the Spring 2022 season in the period from February 14 to May 24.*

It is with this recognition, 8% year-on-year growth** and in light of impressive results from the Spring 2022 season that bTV celebrated 22 years since its establishment on June 1. On the same date in the year 2000, broadcasts began on the air of the first Bulgarian private national television, and today the company owns six TV channels, five radio stations, a number of digital platforms and a film distribution brand.

The series and formats that delighted the audience in various slots of the day managed to tell stories that continue to ignite discussions among Bulgarian viewers. Some participants contributed their colorful image, others built one that took on a life of its own beyond the screen space. Exciting reality shows, diverse talents, extraordinary adventure and battle of characters, beautiful views of exotic countries and romantic encounters are just some of the emotions that have turned the viewing experience into an anticipated event and sought-after programming content.

The month of May passed under the sign of the long-awaited finales of formats such as "Survivor" and "Bulgaria's Got Talent", and Bulgaria's premiering glamorous romantic format "The Bachelor" managed to win an army of followers, trembling in anticipation of finding out which lady will receive the heart of Victor Stoyanov. Romance, exoticism and emotion drove the pictures on the screen, while the audience engaged in watching and commenting in real time on all social networks.

Modern, intriguing, full of love, tension, laughter and ambitions are also the series of bTV - "Sunny Beach" 2 and "I'll Be Fine", which expectedly attract a large number of television viewers with the desire to relive the stories of the main characters. The premiering title in the program - "I'll Be Fine", opened a new page for Bulgarian series, and the plot and actors captivated the viewers with the themes and questions presented through a masterful combination of humor and drama, exciting scenes and memorable characters. For all lovers of a quality variety of comic content with unmissable endings, bTV's beloved "Daddies" are back in the prime time. The brand new episodes will follow the tribulations facing the characters Alex, Rado, Todor and Slavi, which the series left with many unanswered questions.

The amazing trivia game "Who Wants to Be a Millionaire", hosted by Mikhail Bilalov, is the clear favorite in the early prime time, just before the central news, attracting 41% of the viewers in front of the screen every weekday, or double the main competing shows in the 18: 00 – 19:00 slot.

bTV News continues to be the main source of information among the television audience. The newsroom is recognized as having the highest confidence***, and the central newscast at 19:00 attracts nearly 36% of viewers**** Data for the news site btvnovinite.bg show an increase in users by 11% since the beginning of the year (data Gemius), and page views increased by 64%.

Entire article you can read at forbesbulgaria.com